This is an interesting anecdote that demonstrates pretty clearly that soft skills matter.

Toronto is now is an early stage of a pretty strange situation that none of us have probably ever faced before. I’ve been working from home for the past two days now and I’ve been trying to figure out just what the rules are.

The good news is that it turns out that not only are you allowed to go outdoors, at least for the time being, the official medical advice is to do so for your own health. Just try to avoid close contact with other people. So with that in mind I thought I’d share this useful guide that the City of Toronto has put together for people trying to navigate the current confusion.

A few people who know I like to read have asked me questions related to the current coronavirus outbreak (COVID-19), but I’m just some dude on the Internet and I’m not qualified to give any kind of advice. Here are some of the reputable online information sources I’m aware of on the topic.

If you believe you may have come in contact with the 2019 novel coronavirus and are feeling ill, the Ontario Ministry of Health has published an online self-assessment page to help you determine what to do while reducing the stress on the health care system.

I will update this page from time to time if I come across additional useful information.

I just read this article on Demystifying Science about the 1918 influenza pandemic. It’s an interesting perspective given the current situation with COVID-19.

Of course he doesn’t know it, but there’s nothing I’m aware of that this man has done that I don’t admire. Not only does he do things like this, or this but he’s also a published research astronomer.

If I had known this was a possible career path as a child, I have a feeling I might be doing something else these days!

Aside from their political analysis, I really enjoy FiveThirtyEight’s other coverage.  Their roots are in statistical analysis of sports and they tend to cover a lot of obscure topics from a statistical perspective.  This article by Allison McCann is a great example of a side project, looking at the relationship between hip-hop and politics from a data perspective.

She includes some cool interactive graphics as well as a searchable database for political references in rap and hip-hop lyrics.  Plus the article showcases a pretty cool video which is easily my favourite political song of the 2016 campaign thus far.

It’s a somewhat breathless title, but I understand why the producers chose it since we are all unwitting witnesses to the end of a lot of cultural practices and the quite sudden destruction of an ecosystem that humans have been living on for thousands of years.

I’m not going to opine on the particulars since this is a set of issues that I’m just learning more about myself.  I think it would be a good thing if a lot more Canadians in the South watched this video.  It’s put together by the guys who run the AsapSCIENCE channel, though they’ve chosen to keep this video separate from their primary content which is a general science education channel and doesn’t usually delve into political issues.

It’s essentially about climate change and how it’s already beginning to seriously impact Inuit people, which most Canadians should already be aware are one of the most marginalized and most poorly served communities in the entire country.  It has been produced in collaboration with Greenpeace, but don’t let that scare you off, if they did have a say in the production it was a very light touch and regardless of the conclusions or the call to action, the video itself helps to build more knowledge on the topic.

The short documentary is a deep background to a video featuring Bill Nye on as part of their normal science topics discussing Arctic ice melting as it relates to climate change and changes in the Arctic Ocean basin.  It’s also a good watch.

If you’re interested in signing the petition mentioned in the documentary it can be found on the Greenpeace website here.

Check it out, I’m a huge fan of Derek Muller (the host) and anything on PBS doesn’t tend to go too far astray. I’ve read several books on Uranium and the weapons development over the past several years and as much as I’m pretty strongly opposed to the development and stockpiling of nuclear weapons there really is no escaping that it’s one of the most thrilling scientific, engineering, and espionage stories of the 20th century.

I was up late tonight and managed to get this interesting pic of the moon.  What’s fascinating is that with very minimal processing it turned out there were hundreds of stars in the background and they came out as perfect pinpoints of light.  My new-used 80-200mm f/2.8 is turning out to be a pretty amazing lens, especially for the price. 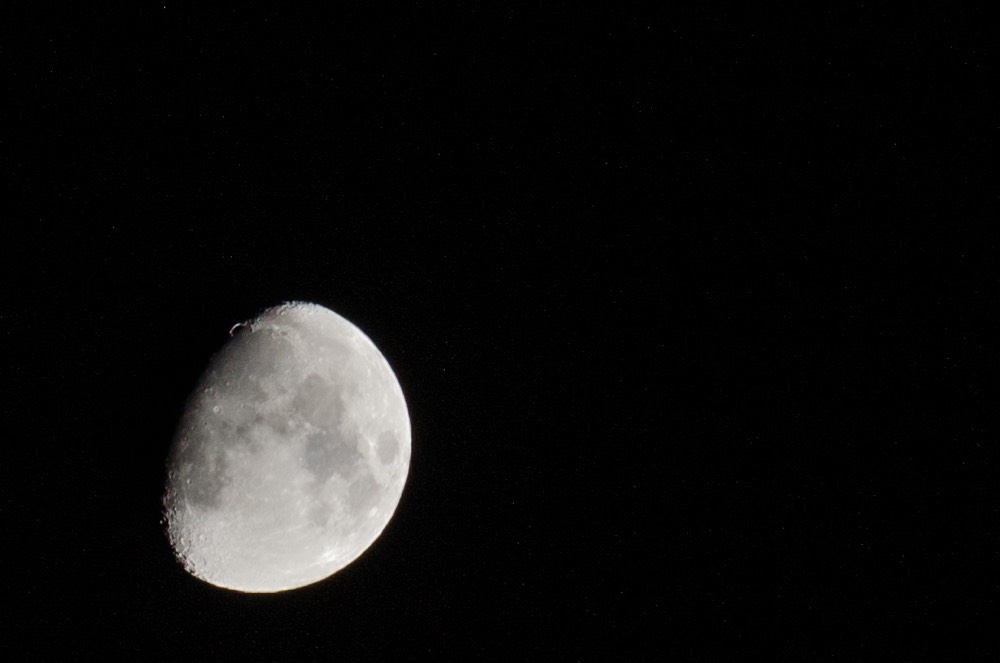 This is without much effort since it’s late on a worknight, but I now know I’m going to have try to get some much better shots, perhaps outside the city later on this year.  I might even think about renting an even longer lens to see what I can do.

I’m not sure how I missed this, but apparently Ontario is about to legitimize homeopathy despite the fact that there is precisely zero evidence that it is anything other than a vestige of pre-scientific superstition.

I don’t do this often, but I’m going to be writing my MPP about this.

END_OF_DOCUMENT_TOKEN_TO_BE_REPLACED

A good stance and posture reflect a proper state of mind.